Skip to content
Flat 10% off on Ernest Borel
Cart 0

From the very beginning, as far back as 1883, Alpina has been associated with horological innovation. Whether it was our innovative way of creating an excellent working environment, or through the introduction of new quality control criteria before anyone else, Alpina has always sought ways to improve how things are done.

He was convinced that Alpina would grow to become supremely successful worldwide for the quality, durability, precision and design of his watches. He wanted to provide sportsmen, engineers, technicians and adventurers with the ideal watch. Hauser turned his vision into reality with the introduction of the “Alpina 4” concept in 1938.

In that year, Hauser revolutionized the sports watch by imposing the four essential principles for any watch that wanted to be considered a true “sport watch.” He insisted that a sports watch had to have each of the following four characteristics:

Through strict adherence to these principles and properties, the legendary “Alpina 4” watches became the timekeeper of choice for Alpinists, air force pilots, divers, the navy and the military.

In all domains where absolute reliability was critical to accomplish a mission, an “Alpina 4” became the mainstay of reliable timekeeping.

The ongoing adherence to the truly innovative “Alpina 4” manufacturing requirements saw the company achieve unparalleled success until the 1970s, when the so-called “Quartz Crisis” made a heavily negative impact on Swiss mechanical watchmakers.

In the 1920s, Alpina was already being sold in over 2,000 outlets worldwide, an exceptional figure for those days. It is no exaggeration to say that Alpina was one of the first leading manufacturers of Swiss watches.

Today, the ideals and innovation upon which Alpina was founded are still alive in our Geneva manufacture, where we make professional sport watches to the most exacting horological standards.

More than any other watchmaker, Gottlieb Hauser was responsible for the concept of the sports watch as it is known today.

The story of Alpina was originally brought to life when Swiss watch making visionary Gottlieb Hauser founded the “Alpina Swiss Watchmakers Corporation,” and in doing so united the leading Swiss independent watchmakers, who became known as the “Alpinists.”

Initially, the Corporation was developed to optimize the manufacturing of movements and timepieces by forming a federating of cooperating manufacturers and suppliers, but Alpina soon started developing and producing in-house calibres and chronometers. In 1901, the trademark “Alpina” was registered and appeared for the first time on high-end calibres and watches produced by Gottlieb Hauser.

The emergence of mass-produced, cheap and impersonal watches nearly led to Alpina’s demise, as the company refused to abandon its mechanical watch standards.

However, despite the difficulties, Alpina remained an independent company and made its comeback in 2002, continuing the horological legacy of Gottlieb Hauser and ensuring his star continues to shine brightly well into the future.

The AL-980 Tourbillon (the first Alpina tourbillon in the company’s century-long history); the AL-718 World Timer (with 24 time zones shown on the dial);

the AL-950 Automatic Regulator, and the AL-710 Small Date all announced the reemergence of Alpina as a name to be reckoned with in the world of Swiss watchmaking.

In 2006, Alpina made one more important move in its journey into the future when it constructed and moved to a new, purpose-built manufacturing site in Geneva, one of the spiritual homes of luxury watch making, as well as being the ancestral home of the Alpina brand.

In 2013, we celebrated our 130th anniversary, persevering in our philosophy to produce the ideally manufactured watches for those brave enough to participate in the most demanding and extreme sporting activities.

In 2014, 76 years after having introduced the concept of the modern sports watch with the Alpina “4” in 1938, Alpina comes back with the concept of ‘4’ in it’s Alpiner collection. The Alpiner “4” is a professional sport watch, featuring the four sports properties: 1.Antimagnetic, 2.Antishock, 3.Water-resistant, 4.Stainless.

In 2015 Alpina invents the Horological Smartwatch, a Swiss made connected watch, with analogical time and quantified-self functionalities display, using watch hands. In the same year Alpina also presents a new in-house caliber, the AL-760 Automatic Flyback Chronograph. This caliber reinterprets the flyback mechanism through the patented “Direct Flyback” technology, invented by Alpina. This technology significantly increases the reliability and the robustness of the flyback mechanism. 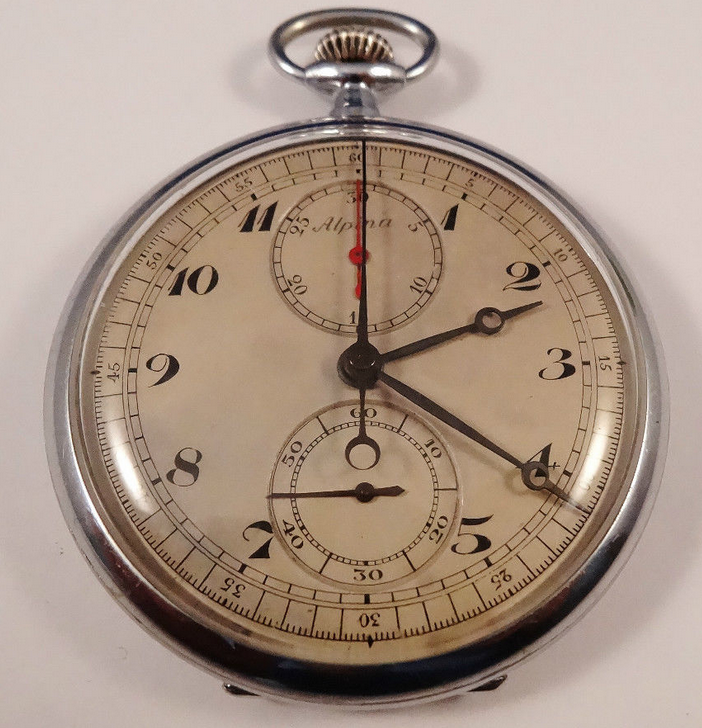